How to Train Your Dragon Live Spectacular: coming to the Verizon Center (and a ticket discount!)

How to Train Your Dragon Live Spectacular: coming to the Verizon Center (and a ticket discount!) 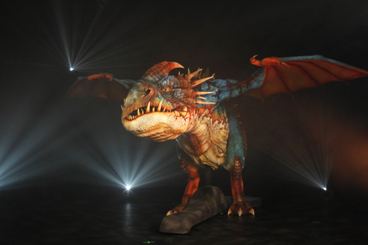 Did your kids love the movie version of How to Train Your Dragon? Want to take them to the live show?

Yes, there’s a live production, and it’s coming this month to the Verizon Center. Here are the details:

HOW TO TRAIN YOUR DRAGON LIVE SPECTACULAR will play at the Verizon Center in Washington D.C. July 19-22. Regular Ticket prices range from a low of $29.50 to a high of $69.50 (excluding fees). A limited number of premium seats and special VIP ticket experiences and family packages are also available.  CLICK HERE to purchase tickets, for showtimes and much more. There are three amazing VIP packages as well. CLICK HERE for details on how to meet the dragons as well as other VIP opportunities.

The live production rolls fire-breathing action, epic adventure and heartfelt laughter into an original captivating story set in the mythical world of Vikings and wild dragons. Based on the book by Cressida Cowell, it centers on Hiccup, a Viking teenager who doesn’t fit in with his tribe’s longstanding tradition of heroic dragon slayers. Hiccup’s world is turned upside down when he encounters a dragon that challenges him and his fellow Vikings to see the world from an entirely different point of view. The story presents a vision so grand in scale that only DreamWorks Animation and Global Creatures could bring How to Train Your Dragon to life in front of a live audience.

And here’s a discount code for DC Moms readers: save 25% on weekday performances (including Friday nights) by entering the code MOM in the promo box which says “MOMMY BLOG”  Get great seats for a big discount!

Here’s a YouTube clip of the performance so you can get an idea of how incredible this show will be:

How this show actually works:

• The production created the first-ever touring flight track system that weighs over 28  tons.

• The flight track uses a proprietary barcode system. The creatures scan a barcode strip as they fly around the track which tells them (and us) where they are at all times.

• Toothless weighs over 7,500 pounds and flies over 1.2 miles throughout the performance which is equivalent to a Range Rover soaring through the arena.

• There are more automation cues in the opening sequence alone than a Broadway musical has in a night.

• The first-ever fully immersive live experience with projection spanning more than 20,000 square feet throughout the entire arena. The back projection wall is equivalent to 9 movie screens combined.

• Dragon wings span up to 46ft

• Each large dragon weighs over 2.6 tons (the size of a family car)

• Over 2 miles of “Dragon Skin” was created

Yeah, I don’t understand any of it, either, but I’m fascinated!

Want to go but hoping Lady Luck will buy your tickets? Two of our friends have tickets to give away: go visit Wired Momma and Musings from Me for ticket package giveaways!

I hope I’ll see you there!

Disclaimer: I was given a family pack of tickets in exchange for writing this post.

When Robin isn’t here you can find her writing on her own blog, The Not-Ever-Still Life, or on Facebook, Google+, and Twitter.