‘The Normal Heart’: A Must-See at Arena Stage

‘The Normal Heart’: A Must-See at Arena Stage 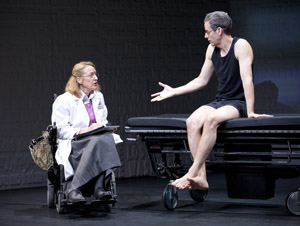 What I didn’t know until decades later is that my brief, however memorable safe-sex class was the culmination of so many years of hard, heartbreaking work and advocacy from a group of gay men who refused to be silenced, even when the medical establishment, the government (both local and federal), and the media wouldn’t listen.

“The Normal Heart” is written by gay playwright and activist Larry Kramer. It’s the autobiographical tale of the AIDS awareness movement that began with six gay friends in Manhattan joining forces to start the Gay Men’s Health Crisis (although the full name of the organization is never mentioned). As a gay man living in New York City in the late ’70s and early ’80s, Kramer engaged in the open, bath-house promiscuity which set the stage for the rapidly spreading disease which had no name at the time but eventually went by such awful names as “Gay Pneumonia,” “Gay Cancer,” and “Gay-Related Immune Deficiency.”

The play follows the Jewish gay writer Ned Weeks (Kramer’s stand-in, played by Patrick Breen) who quickly discovers that 1981 is a dangerous time to be homosexual in New York City — many of his friends and acquaintances are getting sick and dying, and only one physician, Dr.  Emma Brookner (“thirtysomething” alum Patricia Wettig) is even willing to research why she’s treating dying young men.

Along with his friends: Bruce Niles, the hunky  former Green Beret who’s closeted at his high-powered banking job (Nick Mennell); Mickey Marcus, the health and human services worker who won’t apologize for the promiscuous lifestyle (Michael Berresse); and Tommy Boatwright, the much younger and compassionate Southern transplant who starts the hotline that becomes the foundation of GMHC (Christopher J. Hanke), Ned tries to organize and push for New York City’s Mayor Ed Koch, the New York Times, the rest of the gay community to DO SOMETHING, but they’re met with resistance and confusion at every turn.

This is not a happy play, but it’s an important one. It’s funny and heartbreaking and will force you think hard about how our society treats the marginalized. If the first group to be affected by AIDS had been white heterosexual women and children instead of gay men and Haitians, would it have taken so bloody long for the government to respond? Would so-called men of God had called it the “toll” to pay for a sinful lifestyle? Of course not.

The actors in “The Normal Heart” (all of whom are men except for Wettig) give passionate performances that will stay with you long after the curtain call. There are many showstopping moments, but two that I found particularly chilling against the minimalist setting were conversations between Ned and his older brother Ben Weeks (John Procaccino) , a powerful attorney who loves little brother but can’t fully support his new obsession with the mysterious gay illness.

In one conversation, Ned finally has it out with Ben, forcing his brother to admit he doesn’t consider them equals, making his brother reveal that while he can “deal with” the gay thing, he isn’t ready to embrace his brother as a healthy human being who happens to love other men. The emotional gravitas of the scene is remarkable: Ned all bluster and heartache, Ben all calm frustration. In the second conversation, toward the end of the film, Ned and Ben come together after Ned’s dying love Felix (Luke MacFarlane) confronts Ben — who at that point had no idea how awful things were for Ned personally or with the entire community.

It’s easy to be complacent about AIDS. AZT was deemed a wonder drug, and people (in the first world) no longer die as quickly from it. But Kramer, who has volunteers pass out letters from him in front the theater, wants us to remember the truth: AIDS is still an epidemic. It is still killing, not just abroad but here at home as well. Every single person depicted in the play is now dead except for Kramer, and he will never allow any of us to forget. And it’s a good thing he won’t.

“The Normal Heart” is not “The Music Man,” but there is an important place for both kinds of theatrical experiences. Do yourself a favor and get check your calendar, call a sitter, and go see “The Normal Heart.” Tickets go for as low as $40 — a real steal for a performance of this caliber.

I received complimentary tickets to see the play, but but as a career-long entertainment writer, screeners never influence my opinion of a production.

When she’s not lucky enough to see live theater, Sandie blogs about Young Adult literature at Teen Lit Rocks and occasionally about herself at Urban Mama. She also reviews movies and books at Common Sense Media.