My daughter is three and a half, and sometimes she qualifies as a hellion.

Other times, she’s a delight. She’s precocious, highly verbal, and damn cute. One of her favourite pastimes is to charm unsuspecting adults with her winsome ways. She can be polite, thoughtful, gentle, and loving. When she wants to be.

But she’s like the little girl with the little curl. If she should have had a nap but didn’t, if she really needed a snack but decided she didn’t like what was on offer, well, just don’t cross her. She’ll turn on a dime and you’ll be on the receiving end of something a bit more like The Omen than Shirley Temple.

And it’s not that I’m afraid of stifling the creative spirit of my darling wee snowflake. I don’t think children should run wild and free like little feral animals who must be neither caged nor muted. I do quite prefer order to chaos, actually. I hope you wouldn’t think otherwise, though a quick look at my house on any given afternoon might seem to contradict this.

On the other hand, I don’t feel like spending my day barking orders like a major general. I’ve learned, in these six years of parenting two small beings, that my personality is pretty easygoing. I’d rather pick my battles and save my wrath for times when it really matters. That way, my children know that if Mommy shouts, she must be really really super-duper extra grumpy, and maybe they did something to deserve her ire this time. (Something destructive or dangerous or disrespectful to others. Those are pretty much where my line gets drawn, I think.)

Mabel (as I call her on the Internet) is a firecracker. She’s a climber and a leaper, a balancer and a tumbler. She’ll go far, I know. When she misbehaves, I remove her from the situation as soon as possible, or the situation from her. I consider whether fatigue or hunger could have any part in this, or if she’s just being ornery. If I can’t remedy it, I try to at least put her out of harm’s way, where she can’t do further damage.

And sometimes, I forget to put the markers away while I’m making dinner, and I forget that she didn’t have a nap and is hungry and so is on her last gasp, and this happens: 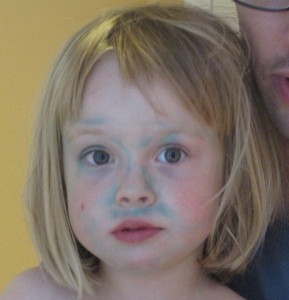 This was after I'd tried to clean it off, mind you.

What are your general operating principles? Have they been molded by the personalities of your children, or by your own proclivities? Have you been worn down by time and sleepless nights and the onslaught of gray hairs, or do you stick to your guns? And where do you hide the markers in your house?

Christine blogs as (Not) Maud at Awfully Chipper, where she avoids housework to discuss naps, muffins, boobs, and superheroes, and shakes her head sorrowfully to tell you how things were different back in The Auld Country.