First Time Camper(s) or Owning Your Own Issues

First Time Camper(s) or Owning Your Own Issues 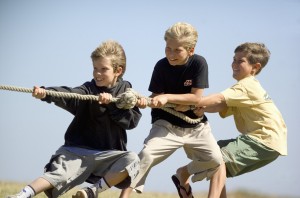 My girls are starting a new day camp tomorrow, and I am a mess!

I hate starting new things — the worry over what it will be like or whether it will be organized or what one should bring drives me crazy.  This is one of those camps that has been around forever, with lots of campers who return year after year and so the official information that was handed out about it was sparse.  Do I apply sunscreen in the morning or send it with them ?  Do they bring a water bottle to drink from throughout the day or does the camp provide cups ?  Is there a designated bathroom time or do the children ask to go whenever they want ?  And on and on …  I can pretty much figure out the answers to these questions, but I still can’t describe what it will BE like.

I’ve been piecing information together from various sources and we drove to the location last week and walked in an looked around.  I thought that would quell my worry, and it did.  For a while.

As I was moaning to my husband Mr. Quimby tonight how much I hate starting new things where I don’t know what to expect, he looked at me and said: “But, they didn’t seem that worried to me.”  I threw my hands up in exasperation and said, “Not them, me !  I’m worried.”  He continued to look a little befuddled and said “But you aren’t going to camp.”  I think he was being facetious.

When I was about to give birth to Beezus, my counselor/therapist gave me a book called “Parenting from the Inside Out.”  It has many points, but the one I took away from it is that I need to distinguish my own issues from that of my child.  I NEVER used to be trepidatious about starting new things.  It was becoming a mother to an sensitive/shy child that changed the way I approached new things because I was worried for her.  But even though my worry is related to my child, it is still my issue and I have to deal with it from my perspective, and definitely not pass it along to them !

So, for now, I remind myself that my Beezus and Ramona will have each other at the camp, that they are excited, that I’ve packed everything they could possibly need.  I take deep breaths and remind myself that this is just who I am – there’s nothing wrong with worry so long as  it stays as worry and doesn’t translate into anything un-necessary like staying at the camp with them (hmm, now there’s an idea).

But if you see woman in Prince George’s County sitting in a Starbucks tomorrow morning and rocking herself and crying softly while maintaining an illusion of tele-working, well, you’ll know exactly who it is.

They had a great day at camp !  They put on their swimsuits by themselves, changed back in to their clothes by themselves, asked to go to the bathroom, ate lunch, watched part of a movie during quiet time !  Ramona asked if they can go back there forever and ever !

On to next week’s camp !

When she’s not crying in the corner after dropping her kids off at summer camp, Ellen lives in Gorgeous Prince George’s County and blogs semi-anonymously at Thrift Store Mama and posts random-ness on Facebook at https://www.facebook.com/ThriftStoreMama and Twitter at https://twitter.com/#!/TSMama1

About the Author: Ellen