Acting with Encore Stage and Studio in Arlington, Virginia

Acting with Encore Stage and Studio in Arlington, Virginia 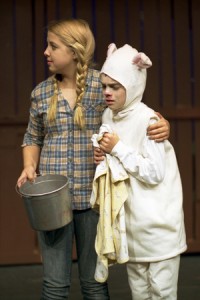 The theatre scene for children in the DC metro area is rich. Performances for young audiences abound and recently, I had the opportunity to see a performance not only for young audiences, but staged by young people! Encore Stage and Studio recently completed a run of the show Charlotte’s Web. My children and I saw a production of this show last season at Adventure Theatre and this year, they were thrilled to see the show a second time.

The children in the cast of Charlotte’s Web were most definitely set to impress. The show was well rehearsed, performed with enthusiasm, and easily held the attention of my six and four year old children. There were many other young members of the audience who seemed to enjoy the show, as did the adults in attendance.

If you have a young performer in your home, you might be interested in the continuous camps and classes offered by Encore Stage and Studio. They host camps for children as young as 4! There’s also plenty of action for teens and pre-teens.

Elaine blogs about her children over at Connor and Helen Grow Up! She received her ticket and one child’s ticket to attend a performance of Charlotte’s Web. She purchased her other child’s ticket. The photos were provided by Encore Stage and Studio. No further compensation was received.