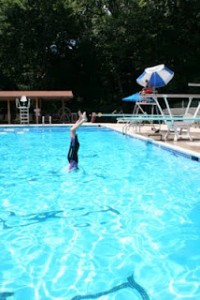 I’ll admit it. When my hometown friends in Kansas were heading back to school last August, I couldn’t shout loud enough about how awesome Virginia – with its King’s Dominion Law forbidding school to start prior to Labor Day – was. There their kids were, trotting off to school in suffocating heat, while my kids were stretching summer out at the pool. But now? I’m downright jealous. My son won’t end his time in first grade until June 22, and that seems like an eternity right now.

Teachers argue that students in early-starting schools have an advantage on standardized tests. The students that started early can have several weeks of additional instruction before taking tests, relative to those who start the year later. Parents, like me, argue that children need their summers. But what we’re really saying, at least in my case, is that students need less formal instruction, not more.

This summer, my children will watch leaves race down the stream at Long Branch Nature Center, my son will have his second year on the diving team at our neighborhood pool (if it ever opens!), and both will spend hours moving furniture, stacking blocks, developing their own games, and making art. They will, in short, play. And while they play, they will learn about how currents affect the path of the leaves they toss, they will learn how to wait in line at the diving board, and they will learn negotiation skills that can’t be taught in a desk. They will also make discoveries and ask questions that I cannot yet anticipate, but I’ll be figuring it out as I go!

This is my family’s first year in a public school, and I can whole-heartedly say that we are all exhausted! The PTA at my son’s school has planned activities ranging from picnics to sunflower seed spitting contests, and I can’t help but think it’s all to try and get kids to the finish line of the year. Keep them motivated just a few more weeks.

But has anyone ever considered shortening the school year? I, for one, am completely in favor of it. The end of the year can’t come soon enough around here, and if I could make it happen faster, I would. Perhaps I should consider moving mid-year, to get the benefit of a late start and an early finish?

Elaine blogs about raising her kids at Connor and Helen Grow Up! Usually, she’s not so crabby but this school year has done her in!