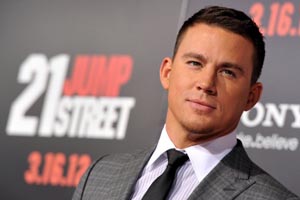 I first wrote about Channing in 2006 when he had a breakout year with roles in “She’s the Man” with Amanda Bynes, the indie drama “A Guide to Recognizing Your Saints,” and the dance flick “Step Up” (during which he met and fell for his co-star and now wife, Jenna Dewan). There was something charismatic about him that made him sexy but approachable. Six years later, and I still think he’s got whatever undefinable “It” creates a star.

Sandie has been crushing on celebrities since she was 8, when she had a thing for Treat Williams in the movie musical “Hair,” which for the record, came out when she was three. She writes about entertainment all sorts of places, including NextMovie, Moviefone, and Common Sense Media. You can follow her on Twitter @urbanmama