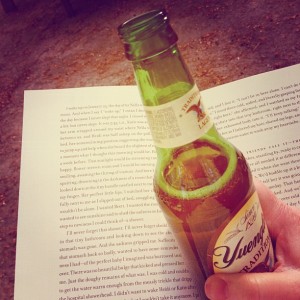 I just love saying this out loud, but my bookshelves are bursting with books by some of my favorite people! This spring has brought a spate of great reading by some of the best parent bloggers on the internet. I’ve been sneaking off to the backyard with a beer, or to my bed with a giant cup of tea, and a good book. Here’s what I have on tap:

Bloom: Finding Beauty in the Unexpected–A Memoir, by Kelle Hampton from Enjoying the Small Things.

I found Kelle’s blog through her viral post, “Nella Cordelia: A Birth Story”. It remains one of the most powerful and honest things I have ever read on the internet. I became a regular reader because of her sunny outlook on life, her way of celebrating both big and small milestones, and her beautiful photographs of her gorgeous girls.

When Kelle first laid eyes on her daughter, Nella, just moments after her birth, she knew something was wrong. While her friends and family were celebrating the beautiful blessing, Kelle was silently devastated. Bloom chronicles Kelle’s personal transformation from the shock and fear she felt upon suspecting, and later confirming, that Nella was born with Down Syndrome, to the joy and fullness of her life one-year later on Nella’s first birthday. Bloom is the one book on this list I’ve finished so far. It did not disappoint. It’s full of brilliant photographs and moving, inspiring prose.

Confessions of a Scary Mommy: An Honest and Irreverent Look at Motherhood: The Good, The Bad, and the Scary, by Jill Smokler from Scary Mommy. I first met Baltimore’s own, Jill Smokler, at a birthday dinner for another blogger. I hadn’t read her blog before, but after spending an evening with her and knowing that I had found a kindred soul, I found Scary Mommy, where motherhood is celebrated but never sugar-coated. There’s brutal honesty and lots of delicious snark.

Jill is a fabulous writer and Confessions of a Scary Mommy is a collection of some of her best, most real-deal essays on the confounding, often-frustrating, absolutely exhausting, yet most awe-inspiring job in the world: motherhood. It’s that book you wish you had read before you had kids.

Let’s Pretend this Never Happened: (A Mostly True Memoir), by Jenny Lawson from The Bloggess. True story, I found Jenny’s blog when I thought I had come up with the BEST blog name ever. I googled it to make sure that no one else had also had such a stroke of brilliance and found Jenny, The Bloggess. Even though she was way ahead of me in cleverness, I was hooked on her blog from that moment on. Jenny’s bizarre and quirky sense of humor has made me laugh harder than is safe for a woman who’s had four kids.

Let’s Pretend this Never Happened is Jenny’s story, from childhood to marriage and motherhood – with a few zombies and taxidermied animals thrown in for good measure. She tells serious tales, of rheumatoid arthritis and crippling anxiety, but in her unique, trademark way that will make you wish you hadn’t taken that sip of Diet Coke just then. Nobody tells a story like Jenny.

Heaven Is Here: An Incredible Story of Hope, Triumph, and Everyday Joy , by Stephanie Nielson from NieNie Dialogues. I found Stephanie’s blog in 2008, soon after word spread across the internet that she and her husband had been in a horrific plane crash and she was on life support. I could relate to her as a fellow mom of four, and I read back through the archives of her idyllic life, making homemade pizza and throwing kids’ birthday parties. I was completely taken with her story and anxiously awaited updates on her condition.

Stephanie survived her terrible injuries, but battled severe burns, searing pain, countless surgeries and months away from her children, who instead bonded with her sisters and were afraid of her, with her now-scarred face. I can only imagine the physical and emotional pain that she endured. She wrote her book to give hope to those in need of it, and to show that even when the life you knew seems like it’s over, there is still life waiting for you.

I was inspired by Stephanie’s life before the crash. I’m even more inspired by how she has lived after.

Mother’s Day is just around the corner. I think a good book, a cozy blanket, and an hour or two to yourself sounds like the perfect gift.