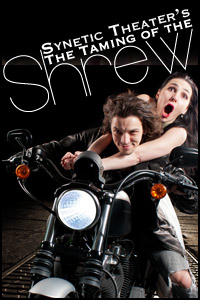 A recent story on NPR “Teen Texting Soars; Will Social Skills Suffer?” caught my attention. The story focused on a poll by the Pew Research Center’s Internet and American Life project which showed that teens text – a lot. And the end result of all that texting may be children who lack interpersonal communication skills.

This, juxtaposed with my recent trip to Arlington’s Synetic Theater’s incredible performance of Taming of the Shrew, really started me thinking about all sorts of communication. For those not familiar with Synetic’s unique brand of theatre – they are quite possibly the premier physical theatre company in the United States. Their performances combine dance, music, movement, drama, and text – almost anything except talking. And yet, their stories are completely clear.

While the Pew Research had me worried that people were no longer going to speak to each other, the Synetic performance made me realize how much communication is non-verbal. And, unless your teen is particularly dramatic when composing those texts, perhaps it’s the physical act of communicating they lack that will prove most important – not just the spoken words. Synetic is doing what it can to bring the physical back into the children’s communication realm. This summer, they’re offering classes for ages 4 – 18. Children can participate in classes focusing on acting, movement, and visual art. Descriptions are here.

Camps run in two-week blocks, starting June 18 and ending August 24, with a one-week session at the end of summer to wrap it all up. Check it out! Friends who have sent their children to these camps before report they love them.

Elaine if a lifelong theater lover and takes her children to all sorts of performances in the DC area. She writes about those and other things at Connor and Helen Grow Up!

I was a guest of Synetic Theater at their production of Taming of the Shrew, though I’ve been to many other performances there that I paid for myself. I’m a huge fan of this theater company. I was not required to write about anything in exchange for the two tickets I received.