All around Northern Virginia, schools and counties are going green in a variety of ways.

On March 3, the year-old non-profit organization NoVa Outside put on its first Green Schools Expo at George Mason University. With 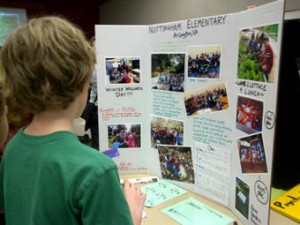 some 24 public schools in attendance, along with more than a dozen non-profits, government agencies, university groups and businesses, the expo drew close to 200 people, including a lot of kids anxious to share their experiences. 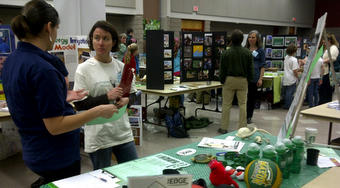 The packed room boasted beautiful boards of with photos of children outdoors at schools and parks. Marcella Ahern from Arlington Traditional School described how her school’s second graders go weekly to the same garden plot. A third-grader from Barrett Elementary in Arlington talked about how fun it was to go outside for scavenger hunts related to the school’s focus this year on wildlife refuges, thanks to a grant. Winners of a competition for best programs were Alexandria City Public Schools, Centreville Elemntary School Clarendon Child Care Center, Churchill Road Elementary School,  and Longfellow Middle School.

Before the expo began, a summit welcomed speakers on the topic of connecting children and nature. Kevin Coyle, Vice President of Education for the National Wildlife Federation and Dr. Dann Sklarew, Associate Professor at George Mason University and the Associate Director of the Potomac Environmental Research and Education Center addressed a crowd that included Arlington Public Schools Superintendent Patrick Murphy and School Board members from Alexandria City as well as both Fairfax and Arlington Counties.

Arlington parent of two and director of Arlingtonians for a Clean Environment Elenor Hodges said, “Our motivation was to bring all the active teachers, parents and organizations together so they could learn and support each other in green schools efforts. We also wanted to elevate the profile of greens schools and environmental stewardship activities to administrators and elected officials.” That, in particular was very successful, she added. “They’ve been talking about the event in their circles,” she said. 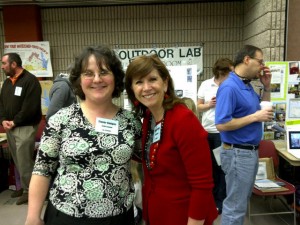 Arlington parent Miriam Gennari also spoke. She cited Sparrow’s funded position as part of the reason ACPS schoolyard gardening and outdoor learning programs are so successful. In Arlington, no such position exists, but the district did just recently create a Sustainability Committee that reports to the Superintendent. Gennari, one of 15 members on the committee, noted a lack of centralization of information regarding outdoor learning despite the fact that many Arlington schools have some wonderful outdoor programs. Tuckahoe Elementary in north Arlington has a wonderful “Discovery Schoolyard” with outdoor classrooms, and Campbell Elementary in south Arlington, already home to several schoolyard gardens, has raised close to $40,000 to build a wetlands learning lab, a project currently awaiting county approval.

At the third meeting of the new APS sustainability committee later in March, APS Science Supervisor Connie Skelton described how environmental literacy is included in curriculum. She also provided an overview, prepared by Arlington Plantetarium director John Harmon, of all the outdoor learning spaces and gardens in APS schools. Participants discussed the importance of teacher interest to maintain programs and drop-off in participation in outdoor learning initiatives at the middle and high school levels. As Arlington deals with projected overcrowding, other issues related to sustainability are coming up, including decisions between relocatable classrooms, modular classrooms, and new building construction. Gennari said, “My hope is that outdoor learning will be considered and carry some weight  in the new capacity plan as green space is already in short supply.”

Also of interest to would-be locavore parents this spring was the inaugural meeting of Arlington’s Urban Agriculture Task Force on March 13. In addition to looking at issues related to rooftop gardens and other efforts to grow produce, the group will also investigate raising “backyard chickens”. According to Tycie Horsley, who was staffing the Arlington Egg Project table at the popular Arlingtonians for a Clean Environment (ACE) Green Living Expo later that week, the new task force will research programs and regulations in other urban areas around the country with recommendations expected to be presented to the County Board in about a year. Catie Drew is the representative from the Arlington Egg Project in the “Citizens at Large” group, and APS Head of Food Services Amy Macloskey is on the Task Force along with some 15 others from non-profit organizations and a variety of other interests.

This month, there are plenty of Earth Day celebrations, and NoVA Outside is hosting a “Day of Exploration and Learning” for early childhood educators. The workshop, April 14 at Beverly Hills Cooperative Preschool in Alexandria, aims to teach early childhood enthusiasts how to connect children to nature, enhance outdoor play spaces and implement outdoor learning programs. Although it’s being targeted to teachers and program directors, it’s open to anyone. See the NoVA Outside website for more information.

Jessica Claire Haney is renovating the home next door so that she can move there and have more room for gardening and maybe someday raising chickens. When she’s not researching green home construction materials, she blogs about health and nutrition and living on the alternative-mainstream border at Crunchy-Chewy Mama.