President’s Day Weekend: How about Disney on Ice 100 Years of Magic?

President’s Day Weekend: How about Disney on Ice 100 Years of Magic? 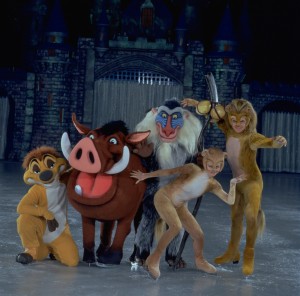 Wondering how to pass the time this long, cold President’s Day weekend? Look no further because an afternoon of Feld Entertainment’s Disney on Ice 100 Years of Magic will delight the boys and girls, young and old, in your house. We were lucky enough to attend opening night at the Verizon Center last night – so read on for which performer you’d likely want to hit the clubs with, which outfit is least flattering for Halloween and most importantly, what my kids loved about the show.

With Jiminy Cricket on the ice while the lyrics of “When You Wish Upon a Star” bounced around the arena and the soft glow of Cinderella’s castle in the background, I can tell you that my girls discovered their happy place in their seats at the Verizon Center. We were practically sitting on Main Street of Disney, to be honest.  For parts of the show, my 6-year-old was literally hopping in her seat because she couldn’t contain herself while my 3-year-old commenced a rare almost 60 minutes of sitting frozen in awe, prior to the intermission.

With an opening act of Aladdin, including a rink filled with dancing blue genies, a pre-intermission finale of retro fav (for all of us 80s kids) It’s A Small World including the Disney light parade – except on ice- and a final act of Lion King before the grand finale – it’s safe to say two hours flew by in a heartbeat at Verizon Center last night. What this year’s Disney on Ice show does best is this: celebrate how well-rounded Disney is and reminds us why Disney appeals to all children, boys and girls alike. Last night’s acts were brief and princess light, leaving room for every kid to see their favorite Disney character. In the first act, the show swiftly and easily moves from Aladdin to Nemo to Mickey and Minnie to Beauty and the Beast, an interval with all the Princesses, Toy Story and concludes with It’s a Small World (a favorite ride for anyone else back in 1986?).

Hands down I loved the costumes in the Finding Nemo part, as did my eldest. The sharks really were so creatively designed and while I had a penchant for the hammerhead shark, my eldest took to the big shark. Somehow I always like it when my kids like the nemesis in a Disney show more than the main characters, maybe I’m a little twisted. But how the two dancers could coordinate moving around in that enormous shark costume, let alone the rear dancer’s ability to pick up the front dancer at one point, escapes me entirely (probably part of the reason I was in a seat and not on the ice). Both my girls were especially excited when Belle entered the ice because I was lucky enough to interview the performer who skates as Belle and Nala last week – and both girls listened intently to our interview. More on that in a bit….

The Toy Story scene came in as a close second for our favorite part of the first act. The green soldiers’ coordinated ice dancing, along with the individual moves of the head soldier, who clearly would be the guy to go clubbing with, really caught our attention. I am no expert in costume design but the shiny green material, including covering their faces, was a nice change of pace from the more classic ice dancing costume we typically see during shows.

Here’s where I enter my one complaint with the Disney on Ice evening shows – why do they start so late? Last night’s performance started at 7:30, intermission an hour later, with the show wrapping up by 9:30. Given the kids who are most interested in seeing Disney on Ice shows are pretty little still – it is just too late to start and so late to end. We have a hardcore Lion King fan in our house, who happens to be 3-years-old. There was no chance we were leaving the show before we saw Lion King, which clearly is held over until the very end because most people have hardcore Lion King fans in their house, but let me tell you, by then this little fan was out of gas and was motionless not because she was entranced but because she was just exhausted.  While the second act was just as brilliantly executed as the first act, what was disappointing for me was seeing my kids run out of steam and just lose the energy to react in the same way as through the first act. Feld…any shot at earlier start times for the evening shows? Given then abundance of epic meltdowns I heard all through the halls of the Verizon Center as we were leaving, I’m confident we aren’t alone in this feeling.

So about the Second Act….Pinocchio is the first story to open the act and I found myself deeply appreciative of the emphasis on some of the Disney classics throughout the show. And again, the enormous whale that makes his way on stage to swallow Geppetto and Pinocchio, how do they do it? Brilliantly executed special effects and innovative costumes on ice is something that is easy to overlook because you get lost in the story but I think is one of the highlights of these Feld productions. Mulan, again with a big bright orange dragon, follows Pinocchio and then came our favorite superheroes, The Incredibles. I appreciated the humor infused in the Incredibles scene with the “I’m too sexy” dance but frankly, I was preoccupied with how not-flattering the costumes are on athletes who are otherwise very thin and fit people. Note to self – don’t dress as an Incredible for Halloween next year despite my obvious super powers.

And then, at long last, wise old Rafiki appeared on stage, followed soon after by Pumbaa and Timon, and I knew there would be peace in my house for a while because my daughter’s best friends had arrived. Simba and Nala embark on one of the most beautifully choreographed dances of the show but I know my little one was too busy gazing at her worry-free best friends to take note of the talented ice skating and creative  lion costumes performing in front of her.

With a finale that no one can deliver like Disney, including every performer and fireworks, I’m certain that everyone left the show feeling that their money was very well spent. If you haven’t done so already, with the long weekend ahead of us, I’d encourage you to purchase some tickets for this show.  Tickets can be purchased at all Ticketmaster outlets via charge, by phone at 800-551-SEAT, via www.ticketmaster.com and at the Verizon Center box office.

Finally, as I mentioned earlier, last week I was lucky enough to interview Marina Bystryakova, who performs in this show as Belle and later as Nala. She hails from Lipetsk, Russia and began ice skating when she was four-years-old. I’ve always wondered about the performers in these shows and what their lives might be like, so if you’re as nosy and curious as me, Marina answered my questions. First, I quizzed her on when she began skating and what age she thinks is the right age for kids to start ice skating lessons, as I wrestle with this in my own household. Though Marina, who grew up with a mother who was a figure skating coach, began at age four, she said ages 6-7 is when you can really first begin to see results and you can tell “right away” if they’re good. Marina said she competed in Russian National championships and then connected with Feld Entertainment when she started University. She was a young 17 when she began skating with Disney on Ice and managed to complete her university degree in six years while touring.

Clearly I sit there and marvel over how they skate so beautifully in these costumes and Marina said “with lots of practice and you get used to it, you just become the character you play.” With such an international cast, naturally I wonder how long they prepared for these tours and surprisingly, Marina said just for about 2-4 weeks before the show starts. Many of the skaters have been touring for years, so she  noted the new skaters typically have more rehearsals.

She wouldn’t commit to enjoying performing as one character more than the other, she said she really enjoys both Belle and Nala, but personally, I thought her costume as Nala and her dance with Simba was so well choreographed, that it won hands down in my book over the Belle scene.

Bottom line – the show is well worth your time and money – and the kids will be entranced.

Disclosure: I was gifted the tickets by Feld Entertainment but my opinions here are my own.  Monica blogs at Wired Momma and contributes to HuffPost. For more of Monica’s opinions or other shenanigans, “Like” the Wired Momma Facebook page.