The Muppets Are Back

The Muppets Are Back 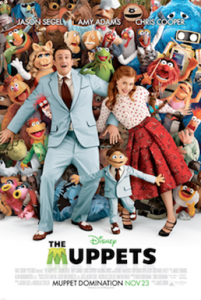 Like most people in my generation, I fondly remember “The Muppet Show.”  It was a staple growing up in my house.  I’m also a Disney fanatic and was thrilled to be invited to an early screening of the new movie, “The Muppets.”  It’s been 12 years since the Muppets’ last big-screen feature film “Muppets from Space” and I couldn’t wait to introduce the Muppets to my 6 year old.  His only experience with them had been at Disney World this past Spring while visiting Hollywood Studios.

“The Muppets” did not disappoint.  Both my husband and I loved the 8os references, the adult humor, and the obvious nods to the old tv shows.  My son, while clearly not getting any of that, thought the movie was hysterical and enjoyed falling in love with Kermit, Miss Piggy, and the new Muppet Walter.

The movie does get a bit precious at times, but it seems to almost be parodying itself.  Amy Adams is, of course, adorable, playing almost the identical part to who she played in “Enchanted.”  And Jason Segal, who also co-writes and executive produces the movie, is the perfect fit for the role.

Honoring the Muppet tradition, celebrity cameos include, among others, Donald Glover, Leslie Feist, Alan Arkin, Neil Patrick Harris, Kristen Schaal, Eddie “Piolín” Sotelo, Ken Jeong, James Carville, Rico Rodriguez and Judd Hirsh.  And there is a lot of singing.  I can not get “Am I a man, or a muppet of a man” out of my head.  I will warn you of that.

Also, why can I not find the OPI line of Muppet nail polish anywhere?  I am starting to consider this a vast Muppet conspiracy.

***I was not compensated for this post but was invited to a free screening of the movie.  All opinions are my own.

About the Author: jodifur

Jodi is one of the few native Washingtonians actually living in Washington.  She works part time as an attorney and lives with her husband, Doug, her son, Michael, as well as a dog, Foster, who has many, many issues.  She started Jodifur because her husband kept telling her she reads so many blogs so might as well write one, and hasn’t stopped for four plus years.  She writes about fashion and shoes on JoeShopping.  She also twitters, a lot, is and on facebook too.