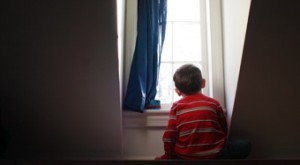 I am always apprehensive about parent-teacher conferences.

Nothing bad ever happens. Sam has never gotten anything but glowing reviews. Quinn is Quinn, which is wonderful and charming. And Jack? Well, I always hear that he is very smart, that he is “making sufficient progress to meet goal(s).” In fact, I never really hear anything that surprises me, but I still feel angst walking in to those meetings—at least to Jack’s.

Today was different. I’ve noticed Jack struggling more and more this year. I’ve started to wonder if an inclusion classroom is the best setting for him. (That’s a whole other set of angsty feelings.) I’ve started to see his autism-specific deficits bumping up against the curriculum.

But here’s the thing. Jack’s teacher sees this, recognizes it for what it is, and gave him the appropriate marks to reflect it. She gets it. She very explicitly knows that giving him high marks just because he is smart doesn’t help him. She doesn’t just want to teach him. She wants to help him.

Third grade is where it starts getting harder for him to slide by just because he’s bright, she told me. I agree. As someone who was smart enough to be an epic bullshitter and get good grades all through school without actually learning anything, I appreciate her seeing that and stating it. (I personally think that I started actually hearing and retaining knowledge for the first time in grad school. Seriously. But I could write an essay like nobody’s business. Kinda like now, actually.)

Here’s where she blew my mind though: She showed me some examples of his work and took the time to go through his answers and tell me how she and he got to them. She showed me one worksheet about seeds and said, “I didn’t know how to grade this. It’s not even wrong, but it’s not right.”

Those of you who have read Paul Collins’ excellent book about autism, Not Even Wrong, might have just taken the same sharp intake of breath that I did when she said that in the conference. (If you haven’t read it, check out my review of the book from last year at Autism Unexpected. Then go read the book.)

That phrase refers to what was originally a derogatory way of dismissing someone’s answer to a problem. It’s not right, it’s not wrong, but the solver’s frame of reference is so far off base that it is not even wrong. It perfectly describes autism and it perfectly describes Jack.

It also perfectly encapsulates what I want for my kid—a place, an existence, where it is okay for him to be not even wrong. Because I love the way Jack’s brain works. I love the way autism has given him this unique perspective that lets him come up with some of the most amazing things. I adore his not even wrongness. I want him to find a way of life where starting from a fundamentally different point of view is an asset to him and where he can be valued for that.

I walked out of the conference feeling buoyed. I’m not sure by what. Was it hope? I don’t think so. I know we have a lot of hard work ahead of us to find Not Even WrongLand. Was it delight that he has a teacher who gets him? Partly, but we’ve had that before too. Jack has always had amazing teachers. Was it a sense that this teacher wants to help Jack get to where he needs to be? Definitely, but that’s not totally it.

I think what I felt was a shift in thinking today. Largely mine. Ever since the Dialogues over at Thinking Person Guide’s to Autism, I have been feeling that shift. I’ve always been a neurodiversity advocate, but sometimes I run across something that kicks that into high gear. Hearing Jonathan Mooney speak for the first time was one of those. The Dialogues was another. Hearing those words come out of Jack’s teacher’s mouth (quite by happenstance; she wasn’t, as far as I know, aware of the implications of the phrase) is the latest.

Let me offer you this quote from Collins’ book: “Autists are the ultimate square pegs, and the problem with pounding a square peg into a round hole is not that the hammering is hard work. It’s that you’re destroying the peg.”

This is where I see my place in the autism community. I’m not running for office. I’m not pushing legislation. I don’t fundraise for causes. I’m not forming organizations and I’m not fighting legal battles. All those things are necessary and important, but that’s not what *I* do. I talk. I talk and I write and I try to win people over with honey and words.

I’m trying to help find more square holes and I am trying to get to the round holes and make them at least trapezoidal before my kids and your kids get hammered into them. I want to spread awareness of both autistic kids and autistic adults. I want this to be a world where it is okay to be a square peg without having to pretend to be round.

A few weeks ago, I started trying to change the world by changing Jack’s class. I went in, armed with nine pages of notes, borrowed liberally from MOM-NOS’ toasters and hair dryers series, and I told Jack’s classmates about autism.

I told them how each one of them is different and how they can be a friend to Jack and other kids with autism. I told them to go forth and be different themselves, and to show other kids that is okay to be different and that even if he doesn’t always show it, that they are important to Jack and they can make a difference. I listened to them at the end of my talk when they told me, “There is a kid on my soccer team with autism,” and “I have an uncle who doesn’t talk,” and I knew that some of them were getting it.

Not all of those kids are going to make it. They will not all stand up for the different kids and adults that they run across in their lives. But some of them will. And some of them, even if they don’t act on it now, just might remember about the toasters and the hair dryers later in life when they come across someone who acts differently. And they might help that square peg find a hole that isn’t round.

Today, at my conference, Jack’s teacher told me the story of a short passage that Jack had to write, which would get a grade of 0 to 3 points. His original sentence garnered him a zero. So the teacher pushed him, and Jack changed it, reading it to the whole class. The change gave him a one. Then he added to it some more and read it to the whole class, and then he got a two. Pushed by his own outrage at the injustice of the Not Three score and the urgings of the teacher, Jack continued, finally reading his final three-worthy passage to the whole class.

I wasn’t there, so I don’t know how it really all went down, but this teacher has created an environment where Jack was comfortable going through this whole process in front of his peers. And the class understood. They knew where he was coming from and how hard he was working.

The teacher has a Hall of Fame wall where passages that are really, really good and earn threes get hung up. Jack’s passage was undoubtedly not up to what was already posted there. But you know what Jack did? He went and got some tape and he put his paper, on which he’d crossed out “0” and written “3,” up there all by himself. He knew that he had worked hard and that, for him, his work was Hall of Fame worthy. And the teacher made a square hole for him and let it stay.

I guess what I felt today at Jack’s conference is that his teacher is finding a way for him to be a square peg and to make it okay. She is in no way an expert on teaching autistic kids. I don’t know if she knows much about autism at all. But she seems to intuitively get the need for square holes, and that? That is everything I can hope for.

Stimey writes a personal blog at Stimeyland; an autism-events website for Montgomery County, Maryland, at AutMont; and a column called Autism Unexpected in the Washington Times Communities. You can find her on Twitter as @Stimey.

About the Author: Jean, a.k.a. Stimey