Going Green at the ballot box

Going Green at the ballot box

With one week left until Election Day, candidates around the region are trying to distinguish themselves from one another. In Arlington, Virginia, Audrey Clement is running for County Board on a Green platform. As an Arlington resident concerned about Green initiatives, today’s guest post author Kim O’Connell was interested in Clement’s platform and offered to interview Clement for a profile here in The DC Moms Green section.

Audrey Clement Campaigns for a Greener Arlington by Kim O’Connell

On a recent evening, I caught up with Audrey Clement, a candidate for the Arlington County Board, campaigning in front of the Ballston Metro station. A longtime Arlington resident, Clement is an information technology professional (with a Ph.D. in political science) who has served as an officer in both the local and national Green Party. As an environmentally progressive, fiscally conservative candidate, she has advocated for more affordable housing and increased recycling, while fighting against litter and the widening of Interstate 66, among other priorities. 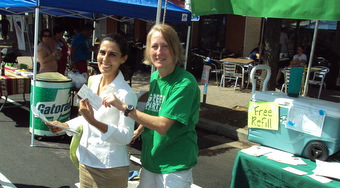 Clement faces a tough field come November; she’s going up against two well-known incumbents. Regardless of the outcome, however, Clement says she’s committed to making Arlington a better – and greener – place. Clement sat down with The DC Moms at an Arlington coffee shop to talk about her goals to reduce waste, support renewable energy, and improve Arlington for all families.

The DC Moms: What brought you to the Green Party?

AC: I took an interest in the Green Party in 2004 because I was unhappy that, in the state of Virginia, there really was no alternative to the main-party candidates except for the libertarian candidate. I felt that people needed an alternative, particularly an environmental alternative….

I’ve participated in a number of local campaigns. In 2008 we put a referendum on the ballot to establish a housing authority that would leverage more money, particularly HUD money, for affordable housing in the county. Unfortunately the state legislature passed a law that made it virtually impossible to run a housing referendum because they drastically increased the signature requirement to get it on the ballot.

The DC Moms: What other issues are you campaigning on?

The other thing I want to do is establish a program to put solar thermal panels on all public schools. There are a couple pilot projects in the works [including a photovoltaic array at Arlington’s Central Library] but there’s no program in place to install solar countywide, and that’s what we want to do….I believe the cost of solar thermal technology is competitive, and the county is in a position to invest in it at this time.

The DC Moms: Tell me about your goal to ban plastic bags and Styrofoam in the county.

AC: We’re currently promoting a ban on single-use plastic bags in retail markets, supermarkets, and drugstores, and a Styrofoam ban in food outlets. Unfortunately, the county has rejected a proposed ordinance [instituting such bans], which was modeled after two successful ordinances adopted in San Francisco. They reject these bans because they say they violate the Dillon Rule, which says that the state legislature retains all powers not already delegated to the municipalities. We feel that the authority to adopt a bag ban has already been delegated by the state according to the [section of the state] code that authorizes municipalities to establish waste reduction plans.

Merchants might voluntarily opt out of using plastic bags, and we’d love them to do that, but we don’t think they’re actually going to do that without legislation requiring them to do so.

The DC Moms: What would you do specifically to benefit Arlington’s parents and children?

AC: I would restore full funding for Arlington’s public libraries and full funding for youth programs that were cut during the early recession….We need fiscal responsibility immediately. I think the county is investing in unwise projects right now. One of them is the Columbia Pike trolley, which will cost $130 million, and that doesn’t count work to prepare the streets.  It could easily exceed $200 million.

The county’s planning firm Dover, Kohl [& Partners] released a report that described the current bus system on the Pike as outstanding. I think it could stand some improvement, but that improvement would come at much less cost [than the trolley]. They could probably serve the same amount of people [that they want to serve with the trolley] by using double-decker buses.

The DC Moms: Win or lose, what do you want people to take away from your campaign?

AC: I want, first and foremost, fiscal responsibility. Our priorities should be [things like] schools, libraries, and street maintenance. I want extended bus service through the county.  If the county wants to put teeth into its plan for a greener Arlington, it needs a much more robust transportation network. I want to refocus the county’s spending priorities on basic needs.

A mom of two, Kim Connell is a freelance writer whose work has appeared in National Parks, Preservation, Eco-Home, Babble, and The Washington Post, among other publications. Her professional website can be found at greenquill.com and she blogs at bloomingboy.com.