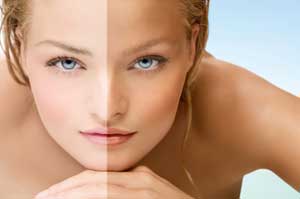 I like to call myself the “whitest white girl”.  I’m not actually porcelain skinned but I am fair, pink-toned and prone to freckling.  I don’t tan.  I burn, freckle and get skin cancer.  It’s probably why I am so obsessed with being tan.  That saying, “You can never be too rich or too thin” also had another line to it, “or too tan” and I think Coco Chanel said it.  She did bring the suntan into vogue in the 1920s after all.  Almost a century later the beauty industry has made tanning fashionable all year long and that’s where my latest quest for a golden glow comes into play.

I confess. I had a spray tan.

I’m coming clean.  I did it.  I swore I would never go this far.  It started out with simple drugstore brand formulas.  I bought a bottle of Jergens and hated the scent but loved the subtle glow.  I moved on to Banana Boat and Nature’s Gate for a more bronzed look.  It wasn’t enough. I had to exfoliate almost constantly to keep up this burnished hue.  I moved on to more expensive potions and lotions.  Chanel, of course, Dior, Fake Bake, St. Tropez, and so many  more I have lost count.  There have been over fifty types of sunless tanner in my bathroom over the last three years alone.  I don’t even travel without it.  I’m kind of gross that way.  When people see me and think I’m pale it’s actually a slightly more tanned version of me. Yes, I write about products and do an annual sunless tanner round-up but it is just to feed this bizarre obsession.

Then one day all those lotions were not enough. The Hollywood Tans sign in my local strip mall beckoned to me.  Mystic tanning in under three minutes!  Three minutes? My mind whirred to life, “Three minutes?! I have that kind of time!” That’s all the kind of time I have with three kids under five.   So I did it.  It took an hour because there is a whole lot more to spray tanning the Mystic Tan way than meets the eye.   It’s slippery, a lot like a stand-up tanning bed and smells just like other sunless tanners and there were very few streaks.  Unlike the lotions and gels you can take off any streaks with make-up remover too.  I was so damn excited.

Today, I’m a little orange but not Oompa Loompa orange.  Actually I’m about five shades darker than normal and streak free.  It is like a little miracle.  My thighs are so tan I don’t see a speck of cellulite.  My stomach looks flatter and the circles under my eyes are almost non-exsistent. I had to wash my pillow and pillowcase but these are the sacrifices we make for beauty right?  Because orange is totally in for fall this year.  Right?

About the Author: Victoria Mason

In 2005, Victoria started the blog, The Mummy Chronicles, as an outlet from her job and her first pregnancy. A year later, she quit her full time job to pursue writing and started the popular review blog, Mummy’s Product Reviews. Fast forward to the present and she has two girls and another one on the way. She is a free-range parent who wonders why if people love free-range eggs and chicken it is so hard to understand and embrace free-range parenting. In addition to writing at The DC Moms, Victoria writes for The Find, Honest Baby and Juno Baby. She can also be found blogging about Post-Partum Depression on a variety of websites as well.