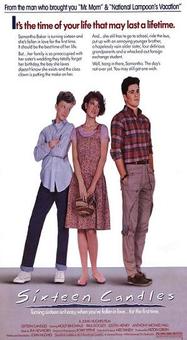 So EVERYBODY knows who “Jake Ryan” is… I won’t even dignify it with an answer.

But who is “Blane McDonough”? …

Blane is the guy from “Pretty in Pink”…

Yeah, I know.  I had to look up Blane’s last name on Wikipedia… I didn’t even remember it.

Which brings me to my topic today; it’s a topic for the ages-

“Sixteen Candles” vs. “Pretty In Pink.”

Which one is the better movie?

Before I make my argument,

A while back I read an interesting article in Vanity Fair on John Hughes, the creator of both films, and then I just read a blog post on Culture Brats, that I found via StumbleUpon, (I know, I can’t believe I’m being so “social media-savvy” either) that discusses this very topic.  Karma?  Or maybe I just have Sixteen Candles on the brain right now?

Anyway, while the blog post on Culture Brats was extremely well thought out,

and I respect both sides of the argument…

It really comes down to one question:

and is there seriously anyone out there who can make a good argument for Blane ?

“Anyone… Anyone?” (to quote from another John Hughes movie, Ferris Buellar’s Day Off)

Jake Ryan was cool and and popular and a dreamboat… and kind and honest and liked a girl for the whole package- what was inside and out.

Who didn’t daydream about Jake Ryan?  I did.  And I’m not the daydreamer type.

Did you ever, honestly, pine over Blane?  We was a wimp; he only stood up for himself and “his girl” at the very end of the movie… and he seems kinda-boring!

Who would you want to date- Jake! or Blane...

“Blane” doesn’t even sound cool in comparison to “Jake!”

To quote from another great movie, “The Sure Thing” from 1985 (substituting “Jake” for “Nick”)-

And what about Farmer Ted (Anthony Michael Hall) vs. Duckie (Jon Cryer)?

Farmer Ted totally wins!  I’d kinda wanna be friends with Farmer Ted.  He’s a nice guy, basically.  He’s actually a “cool geek.”  And most importantly, he doesn’t get Samantha, but he recovers and isn’t pining over her.

But to get back to Jake Ryan, because he’s dreamy-

Jake still holds up today!  I’d date Jake (if I were single) right now, wearing exactly what he wore back then.  Blane and his friends in linen pants and linen blazers?!  That didn’t even look good back in the “80’s” !!  And the story!  That still holds up too!  In fact, I said in my Movie Review of “Twilight,”

“Teen angst, first love, plus vampires thrown in… and they are good vampires– are you kidding me?”

This movie is 16 CANDLES and Jake Ryan is a cool vampire.

So there you have it: Proof that Sixteen Candles wins over Pretty in Pink and thus,

Jake Ryan wins over Blane… whatever his last name is

But we already knew that, didn’t we  🙂

What do you think?

When Nicole is thinking about ’80 movies, she likes to concentrate on the good stuff over at her blog.

About the Author: Nicole Crowley