Comfort for my persistence?

Comfort for my persistence? 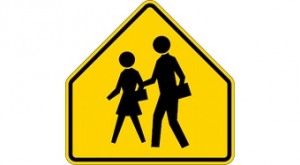 A few weeks ago I was accused of pursuing something in order to give myself “comfort for my persistence.” Our school is trying to create a safer environment for the 900+ kids that walk to our elementary school every day.

In the face of crazy drivers, some who speed, some who disobey basic traffic laws, and some who violate well known school procedures, we thought it best to pursue further signage for the street out in front of the school.

Instead of telling me to kiss off politely, the district employee I was conversing with tossed it to his boss, who proceeded to smack me across the face by accusing me in his reply of pursuing better signage aground our school to make me feel better, thus wasting taxpayer dollars. I paused, fired a note to the Superintendent, the Assistant Superintendent in charge of this particular office, then I waited. I copied my school board member and the three at large members, two of whom I heard back from almost immediately. I was flabbergasted that I never heard back from anyone else from the central office—not a soul.

There I was, a parent having a conversation with a school employee, when it turned south. I never in a million years thought that I’d be accused of doing this for my own gain, but there it was in plain text in a note from the man in charge of safety and security for our schools, “I will not acquiesce to being a party of wasting tax dollars on a project that would do nothing other than give some people comfort for their persistence for pursuing a unneeded and ineffective traffic control device.”

I was being accused of wasteful spending of tax dollars, of doing this for my own benefit, and of seeking comfort in the installation of a traffic control device. Yeah, the installation of a sign. Here I sit, several months later, still having heard nothing back from anyone in the central administration. But the thing that they don’t know is that this nasty-gram didn’t scare me off. It simply made me dig in a bit and keep plugging away, albeit through different channels, and it gave me a good laugh. Clearly they have no idea what drives me, and have no idea that I volunteer out of a commitment—a strong commitment—to the community in which I live. Obviously the man who wrote this note doesn’t know that, nor does he have any concept that someone might actually pursue a safety device for the protection of the kids who are walking to school. You’d think he’d have run across parents like me before, as this is what he does professionally. Although you can hardly call him a professional when he talks to his “customers” like this.

In case you are wondering, the story doesn’t end here. We’ve been working around the rude gentlemen the safety office in an attempt to get something going to help protect our kiddos. The police department has been helpful, as has VDOT. It seems that the one office within our school district’s central administration that is responsible for safety and security is simply not willing to work with a parent advocate in any way, shape, or form. Sad, but true. I’m not the first to run into this one particular man, and I’m sure I won’t be the last.

But that’s not going to stop me, and I certainly hope that it won’t deter any other parent or advocate from pursuing that which they believe in.

Suzie blogs about the kids that she’s advocating for over at Confessions of a Not So Well Behaved Woman.

About the Author: Suzie Phipps