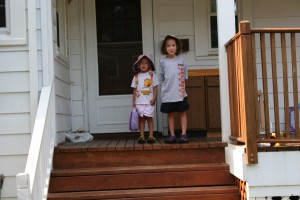 I am, at heart, a rules follower. I push to change rules, and occasionally a rule will be so ridiculous that I cannot, in good conscience, follow it. But mostly, the guidelines set out are the ones I follow. It wasn’t long after my son was born – an August 2005 baby – that my newly-formed moms’ group started what would turn into a 6 year discussion of when to send our children to school.

From the start, I advocated sending a child “on-time”, which for me meant if they hit the cut-off for kindergarten in 2010, their child should go to kindergarten in 2010. Others took a more nuanced tact of defining “on-time” as when they believed their children were ready – which may well be a year after the public school system declared them ready. Still others were completely astounded that their children – all within 3 months of my child’s age – would be starting school a year later than my son, merely because their child’s birthday missed the mark by a few weeks.

Turns out, the discussions we were having were being played out by lots of parents, and eventually we learned that choosing to send a child to school a year after they were first eligible was known as “redshirting” . Tradition dictates that children begin attending elementary school at age 5 – as a kindergartener. In fact, in Virginia (my home state), it’s the law (though the law allows for exceptions for one year). Most state laws, however, dictate that compulsory education begins at age 6. This paves the way for parents to delay the start of school for a year, and enter their 6-year old child in kindergarten. In fact, DC Mom contributor and education guru, Amy Mascott, did just that! (Amy lives in Maryland where compulsory education starts at age 6, so she’s not a law-breaking scofflaw, she’s just a very well-educated parent doing best by her child!)

This is one of those many cases where what’s good for your child may not be good for all children. Even before the practice of redshirting became popular, kindergarten teachers bemoaned the large differences between the maturity levels of their students, which spanned roughly 12 months. My own kindergarten teacher selected the class so that the younger students (me included) would attend in the morning and the older students would attend in the afternoon. Now, teachers deal with an age range that can span 18 months or more.

In some of the first research that came out on this subject, education researchers Susan Dynarski and David Deming found that students who are redshirted face an increased likelihood of eventually dropping out. Now, rather than having roughly two years of high school where the student was old enough – by law – to stop attending school, children have three. And they take advantage of it!

On the other hand, I hear what others are saying about preserving childhood just a little longer. I am a fierce advocate for childhood. I wish I could watch my kids skip rocks in creeks, build fairy castles from twigs, and dream up adventures for a long time. But that rules following part of me? It affirmed for me that at age 5, my son would be in kindergarten. Then, I attended kindergarten information night. It was a disaster.

I couldn’t imagine my child being in a full-day curriculum at age 5. I couldn’t get past the idea that this was possibly going to be the best playtime my daughter (2 years and 2 months younger) and he would really enjoy together for long parts of the afternoon (and it was!). The constant reminders from the teachers I observed to “sit, pay attention, and be quiet” were just too much. I couldn’t send him to kindergarten at my highly regarded North Arlington elementary school.

So what did I do?

I kept him at his beloved Waldorf School for his kindergarten year. There, he spent his mornings running around with a pack of boys, building forts, developing his first watercolor paintings, splashing in puddles, and listening to puppet shows. Notice anything missing? He wasn’t talking about the alphabet and numbers. He wasn’t lining up to eat lunch in a cafeteria. He wasn’t even being asked to sit still that often.

And now the school year starts again – and he’ll be going to first grade. His teacher is well aware that he hasn’t followed the traditional education path. She knows the only reading he has been taught are the lessons I’ve given him these past two weeks. I have spoken at length with her and the principal about my son. My principal very firmly said “I love my Waldorf kids. My experience is that they come ready to learn. They pay attention better than any other students I have – and I’m not worried one bit about him. Send him to first grade. Anything else is a disservice to him.”

He’s starting first grade soon. And although I don’t like to admit it – I’m nervous as H-E-Double Hockey Sticks!

Elaine chronicles her children’s lives over at Connor and Helen Grow Up.