Just Move It, Move It

Just Move It, Move It 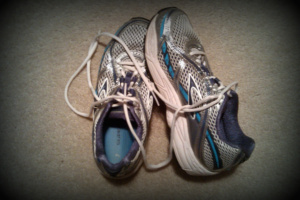 Earlier this summer, I made the decision to get off my duff and start exercising.

I have never been a fitness buff, but my lack of activity had reached an all-time low.  I was determined to turn that around and do something good for myself.  The decision to start moving was not made lightly.  In the past, I would jump into an overly ambitious exercise regimen that would last maybe one day.  This time, I carefully thought out what I am able to do, factoring in time and equipment available to me.  I also forced myself to cast off comparisons.  I get envious of people who are able to run marathons, swim laps at the pool, and lift thousands of pounds of weights… and I become discouraged because these are not things I can do.  I had to make myself realize that I am not at that level and be okay with it.

I decided to simply walk.  Walking is something I can do, and more important, is something I enjoy.  Starting an exercise regimen of walking would still be better than doing the nothing I had been doing.  So it was with this in mind that I began walking every morning.  My goal was to walk between two and three miles, although I decided even one mile would be sufficient.  No guilt allowed in this exercise plan!

To keep track of my workouts, I utilized an app which measured the time and distance I walked each morning.  And for 32 days, I managed to do it!  32 days straight, averaging 2.37 miles each day.  I didn’t walk very quickly at all;  I’m actually rather embarrassed about the pace at which I trudged.  I will share that I burned 8421 calories.  That’s quite an achievement, right?  I enjoyed the time I ambulated throughout my neighborhood, and I felt healthier.  I also slept better at night (when The Husband wasn’t waking me sawing logs).  I made my walks “my time” to think, dream, and worry while I put one foot in front of the other.

My 32-day streak ended last week, shortly after I stepped on the scale and did not see a decrease in the number on the display.  The Husband claims this is due to an increase in muscle mass, but I think he’s blowing sunshine up my (already too big) butt.  Whatever the reason, I am discouraged as I had hoped to see more visible progress from the daily exercise.

I plan to continue my walking regimen, and hope to have a 33 day (or more!) streak next.  So far, though, there have been hiccups.  I haven’t been able to motivate myself to get going, although I am anxious to do so.  I know this is something I can do and want to do.  For some reason, though, I can’t convince myself of this when I wake each morning.  Yet.

Michelle blogs at Wife and Mommy, writes online a few other places, and can be found on Twitter!