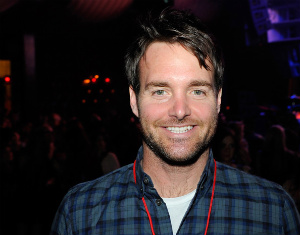 Most of my friends agree that funny guys are hot. Being funny really ups your hot quotient! Almost everyone I know is hung up on the adorable Jason Sudeikis and this is an obsession that I can totally support, he’s good looking and very funny. Very crush worthy. But SNL has provided us with a dark horse in the running hottie. Will Forte.

“Doesn’t he usually play the wierdos and freaks?” you say. “Oh yes” I say “But don’t let that fool you, that just makes him even hotter in real life”

You know him from: “Saturday Night Live“: with characters like Tim Calhoun, MacGruber and ESPN co host Greg Stink; Forte has been making us laugh for nearly ten years. It was a sad day for the SNL world when he decided not to return for another season. After what was a seriously underappreciated turn in the movie “MacGruber,” he has been cracking the world up playing Ted Turner on “Conan.” He’s been showing off his legs as cross-dressing  boyfriend of Jenna Maroney on “30 Rock” and recently showed up on  SNL alumn Amy Poehler’s “Parks and Rec” as a Twilight obsessed divorced dad. With two movies in post production right now and another one filming we will be seeing a lot more of him in the next year. Yay!

Why Him: This is a man who names the day his neice being born as the best in his life. Who interviews his grandmother, and while it’s funny and for his movie, you can tell he loves her crazy!   He is kind natured and willing to do anything for a laugh. His commitment to both his comedy family and his real family is in a word: HOT! Not to mention he is hiding a hot body under those comedic disguises. And can poke fun at some of the guys you should avoid. Will Forte is hot inspite of himself.

Actually I changed my mind. You guys go back to the Sudeikis love. I want Forte all to myself!

Despite her Will Forte love, Stephanie actually is married to the right guy. A man who willingly puts on SNL reruns and MacGruber even though he has to listen to her school girl sighs and giggles. She in turn always puts on any movie with Rachel Wiesz in it for him. She blogs at Dial M For Minky, Just Be Enough and is an iVoice for iVillage.

About the Author: Stephanie